Moment of Discovery: Social and Emotional Growth on the Floating Classroom

Moment of Discovery: Social and Emotional Growth on the Floating Classroom

We’re excited to introduce Moment of Discovery, a new blog series in which graduate students, alums, educators, and other community members share a moment that sparked curiosity, formed new connections, and fostered growth — both for themselves and for the students they teach. We encourage you to enjoy this and upcoming posts, and to share your own #MomentOfDiscovery with us on Facebook, Twitter, and Instagram!

Note: The floating classroom is a movable dock on Mac’s Pond on IslandWood’s Bainbridge Island campus. Students in the School Overnight Program move the Floating Classroom from the shore towards the center of the pond by cranking four turnstiles in unison. 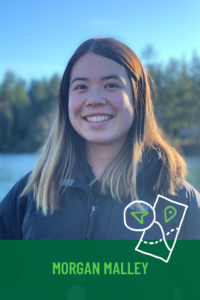 Team Stream had moved the Floating Classroom to within six inches of being fully docked when Lily, one of the students, asked her classmates to stop moving the turnstiles.

When they ignored her request, she proceeded to scream at the top of her lungs for them to stop. I acknowledged aloud that Lily’s screaming made me feel like she did not feel safe, and offered her the opportunity to call a safety freeze. I reminded Team Stream that a safety freeze entails that we stop our bodies and turn our attention to the individual who called it.

After I prompted Lily to take a few deep breaths, she told us that she had called a safety freeze because she became nervous about her hair being caught in the Floating Classroom’s turnstiles. She also felt like the turnstiles were moving too quickly.

A few students quickly responded that she should have just let go and stepped back, but Lily told them that she didn’t want to give up her turn. Again, the same few students simply repeated that she could have walked away to stay safe. I thanked the students for sharing their solution to the situation and reiterated that Lily had chosen to advocate for safety.

Then I turned to Lily and asked if she wanted to share how it felt to advocate for herself to her peers and not be heard.

“I have felt unheard my whole life,” she said. “After my sibling passed away, my mom only looks at her phone — she never sees me. This moment is my whole life.”

I thanked Lily for the bravery it had taken to share this. Team Stream had come up with one potential solution to Lily’s concerns (walking away), but I asked them what else they could do if something like this happened again.

Victor, a student who had frequently derailed lessons and conversations before this moment, shouted that “the people who did not hear her should say sorry!” I replied that apologizing could be a good way to restore trust and safety if Lily chose to accept the apology. 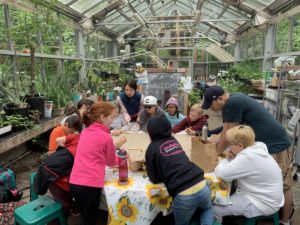 I circled back to my original question. “What can we do the next time this happens?”

Lily said that an apology would help. After Team Stream apologized to Lily, I provided her with the space to have the last thought, and we disembarked from the Floating Classroom.

To me, this is what transformative teaching looks like — students acknowledging their abilities and applying those abilities independently. All week, Team Stream had worked on collaborating, communicating, and advocating for themselves and each other. Victor and Lily had been two students who struggled to engage.

Both were hesitant. Both were afraid of failure.

But by stepping up and using their voices, Victor and Lily shared a beautiful transformative teaching moment.

Morgan Malley (’19) is an alum of the IslandWood Graduate Program in Education for Environment and Community. Learn more about the program here.