To Name or Not to Name: Graduate Student Benay O’Connell Explores the Complexities of Naming Species

To Name or Not to Name: Graduate Student Benay O’Connell Explores the Complexities of Naming Species

During my orientation at Islandwood, standing on a bridge over a river, our professor asked, “Is putting a name on a species important?” 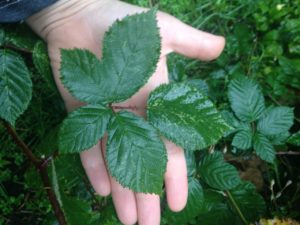 My class of nineteen graduate students spread out across the bridge, one end signifying that they believed that “names of species are crucial to learn” and the other end signifying that “names of species are not important.” About a third of students gravitated towards each end, with the remaining third spread out along the middle of the bridge. I found myself somewhere in the middle. A lively class conversation followed.

On the “names aren’t as important” end, my peers worried that reducing a plant to a name could allow us to fall into the trap of only mentioning the name of a species and then moving on without mentioning any other potentially interesting or important facts about the plant.

Another student advocated for actively avoiding naming species, since stating the name could discourage a sense of wonder. She shared an example of being in a group of students who had just come across a newt on the trail.

The students exclaimed: “Wow! What is that?” “Look at the way it’s squirming!” “Why does it have an orange stomach?” “It looks so slimy!”

In this instance, giving a name may have inadvertently stopped some of the students’ awe and curiosity.

On the other side of the bridge, peers argued that knowing the name of species shows respect. We respect people by knowing their names, so we should with other organisms as well. It also fights the “mass of green” effect, where the forest can look like a homogenous green area. Naming specific plants can help students learn more about how specific species interact with each other and within systems.

I was somewhere in the middle. In my teaching, I’ve found that names are useful when used as a 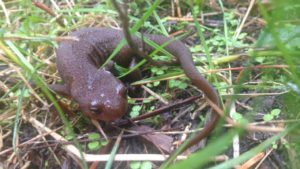 gateway for more knowledge, and when talking about relationships between species. I believe that it is possible to have meaningful experiences with species without knowing their names, but being able to identify an organism helps me and my students remember and connect information. At the same time, it is important in our role as educators to make sure we aren’t just naming an organism and leaving it at that, ending inquiry.

This question was at the forefront of my mind during a Flora 101 class, when we were introduced to many of the major plant species on IslandWood’s campus, and a Wild Edibles class, which further acquainted us with many of the plants we could enjoy, and learn from, with students.

In our Wild Edibles class, we learned how to identify and use edible plants to engage students in sensory experiences, furthering their learning. I found names to be particularly important in this endeavor. A name is a good anchor in which to attach other information, such as whether or not a plant is edible. Names can be used to facilitate communication; my classmates all know which plant I mean when I say “salal” or “evergreen huckleberry.”

We learned how to tell an invasive Himalayan blackberry, with its thick stem and 5-leaved clusters, from a native trailing blackberry, with smaller berries and a thin, mint-green stem. We learned that salmonberry leaves look like the wings of a butterfly, and that Big Leaf Maple leaves look a bit like huge human hands. We learned that native salal has sturdy, leathery, alternating leaves, and that it is handsome enough to be exported abroad for use in floral arrangements.

In our Flora 101 class, I found some plants easy to identify; snowberry has white berries that look like puffy bits of snow. But when our professor told me I could identify the red huckleberry in the winter, without its characteristic red berries, and when even its bright green leaves have dropped, I was doubtful. But as she pointed out how its stems stays bright green even in the winter, and how the stem, instead of being round and straight, is squarish and the ends fractal-like, I realized…I’ve got it. Anecdotes like these help me remember species, are fun for kids, and create connections.

Many kids learn best by song, story, and activity. At IslandWood, we have a particularly catchy song that teaches kids about “cedar, maple, alder, hemlock, and a Douglas fir!” I like to follow this song up with a participatory skit with more information about these trees, that ends with a mouse getting stuck in a Douglas fir cone, which describes why the cones appear to have the back legs and tail of a mouse.

We also teach students about plants during “Each One/Teach One,” a kind of “professor solo hike” where students become an expert on their plant and teach their classmates about it— how indigenous people use the plant, what its medicinal uses are, whether it’s edible, the mythology and folklore surrounding it, and other interesting tidbits. These activities help us to go beyond learning just the name of a plant.

Knowing both the names of these plants and more information about them has given me a more intimate experience of this island. Walking to class, I smile at dinner plate-sized leaves waving in the wind, zoom in on leathery leaves, searching for the last berries ready to be picked so I can taste their blueberry-like tang, run my hand along the fuzzy foliage of a plant whose berries are long gone, glimpse a bushy tail disappearing into a thicket.

Benay O’Connell is a student in the IslandWood Graduate Program in Education for Environment and Community. Learn more about the program here.