“What should the Duwamish River be like in the future?”

Celina Steiger, IslandWood’s Urban School Programs Coordinator, poses this question to a group of 5th graders from Maple Elementary School as they sail on an Argosy boat down the Duwamish River in South Seattle. As participants in IslandWood’s new pilot program, the Duwamish River Program, they have spent the past three hours learning about the social and ecological history of the river that lies at the heart of their own community. 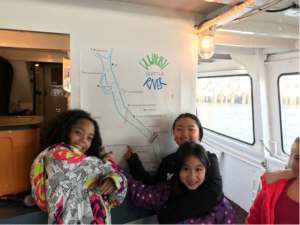 [Image description: a photo of three students on the Argosy boat during the Duwamish River Program. They are posing in front of a drawn map of the river.]

The history of the Duwamish – Seattle’s only river – includes decades of pollution that eventually led to it being named a Superfund Site by the EPA in 2001, which classifies the river as one of the most toxic sites in the United States.

It also includes the ongoing restoration efforts by the Duwamish Tribe, Boeing, the City of Seattle, groups like the Duwamish River Cleanup Coalition (DRCC), and many dedicated individuals.

The Maple Elementary students call out a variety of answers to Celina’s question, drawing on what they’ve learned about the river’s history and the affect of that history on those closest to it, including the students’ fellow residents of the South Park and Georgetown neighborhoods, the Duwamish Tribe, salmon traveling to the river to spawn, and many others.

Today, these students are not only learning about the history of the river, but exploring their role as stakeholders in what its future could and should look like.

AN INTERDISCIPLINARY APPROACH TO ENVIRONMENTAL EDUCATION

Drawing on the environmental education curriculum of IslandWood’s Community Waters program, the Duwamish River Program incorporates many of the strategies used in Community Waters – with a twist.

Where Community Waters focuses on investigating environmental phenomena through the lens of the Next Generation Science Standards, the Duwamish River Program takes a more interdisciplinary approach, incorporating classroom social studies lessons alongside opportunities to practice real-world science skills. The ultimate goal is to build on students’ existing relationship with the river and their community using both lenses – environmental and cultural. 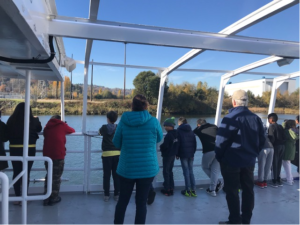 [Image description: a photo of Celina Steiger and a group of students on the deck of the Argosy boat during the Duwamish River Program. They are looking towards the shore of the river.]

To meet this goal, IslandWood’s team, led by Celina, drew on You Decide, a civics assessment tool developed by the Office for the Superintendent of Public Instruction (OSPI) and used in Seattle Public Schools. This tool helps students strengthen their knowledge of public issues, learn about different stakeholder perspectives, and advocate for individual and collective action.

With a complex history, multiple issues at play, and a variety of stakeholders affected, the Duwamish River proved to be the perfect site to explore each of these elements in a real-world context.

CRAFTING A COMMUNITY-CONNECTED PROGRAM THROUGH COLLABORATION WITH LOCAL ORGANIZATIONS

Before this interdisciplinary approach could be put into practice, however, the team knew that the program would more impactful if they collaborated with the DRCC.

As a powerful advocate for the river and its surrounding communities, the Duwamish River Cleanup Coalition (DRCC) “elevate[s] the voice of those impacted by the Duwamish River pollution and other environmental injustices to advocate for a clean, healthy, and equitable environment for people and wildlife.”* Celina and the rest of IslandWood’s team knew that the DRCC’s expertise would prove essential in creating a successful and authentically community-connected program. 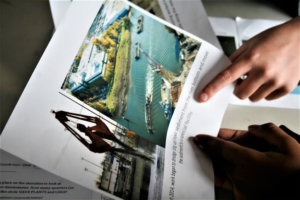 [Image description: A student holds a handout showing photos of a cleanup effort on the Duwamish River. Another student is pointing at the text on the handout.]

Why was it so important to make sure the program was community-connected? Because, as an instructional strategy, connecting students’ classroom learning to real-world phenomena in their own communities helps make scientific and sociological concepts tangible and engaging. It also allows students to strengthen and apply their knowledge through firsthand experience, and reinforces the fact that “the environment” doesn’t just refer to forests or mountain ranges – it can be as close as the river running through your own neighborhood.

A key step in this collaboration was to ask the DRCC what they hoped students would come away from the program understanding – about the river, its history, and the ongoing efforts to clean it up. The insights they shared not only shaped the program’s goals and structure, but allowed Celina and her team to design a program that would effectively serve the needs of those most affected by the pollution of the river – the residents of the neighborhoods surrounding it.

INVESTIGATING ONE OF THE MOST TOXIC SITES IN THE U.S.

Drawing on resources and input from the DRCC and IslandWood partners Seattle Public Schools and Seattle Public Utilities, the team wanted to develop a program that would provide a multifaceted view of the river and its significance.

To do this, they chose to include a wide variety of activities and perspectives. During the three hour trip down the river, guest stakeholders come onboard the Argosy boat to share their connection to the Duwamish River, scientists from Seattle Public Utilities help students test the quality of the water, and the boat pauses at five “Story Stops” that offer insights into different aspects of the river’s history. 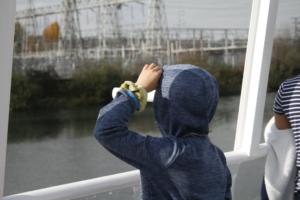 [Image description: A student stands on the deck of the Argosy boat and looks out at the bank of the river. On the bank, an industrial-looking structure is visible.]

During the first of these stops, at Kellogg Island, students gain a deeper appreciation for the role of the Duwamish Tribe in stewarding the river. At the Boeing plant and a nearby metal recycling facility, they learn about the impact of industrialization, and the recent restoration and planting projects that have begun to counteract this damage. At Hamm Creek, Celina tells them that the area had become clogged with trash and ivy until the Duwamish Tribe and local activist John Beal intervened, allowing the creek to once again become a site where salmon are able to spawn. Lastly, students get an up-close view of a sewer overflow pipe – a reminder of how many pollutants are introduced to the river.

Along the way, Celina and her fellow instructors demonstrate to their students that while addressing environmental issues isn’t easy, it is possible – even at one of the most polluted sites in the U.S.

WHAT’S NEXT FOR THE PROGRAM?

So far, four classes have participated in the Duwamish River Program, with more scheduled for the spring, and nearly all of the teachers who have attended are eager to introduce the program to other classes from their schools.

Samantha Pinnell, a teacher from Sanislo Elementary School, says that the program has helped her students “deepen their understanding of place and interdependence. Students were able to make connections about the health of the river and its impact on our community as well as our community’s impact on it.” 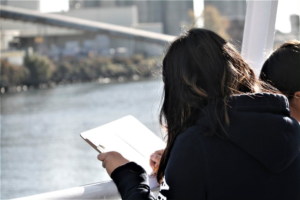 [Image description: A student writes notes on a piece of paper on the deck of the Argosy boat. The river and the river bank are visible in the background.]

Since this program is in the piloting phase, feedback like this from educators, students, partners, and other stakeholders is invaluable in shaping the direction that the program will take in the future.

Expanding IslandWood’s existing programs into different areas of Seattle, like the Duwamish River Valley, represents an important opportunity for learning, growth and collaboration. By partnering with local stakeholders like the DRCC, we are able to support existing environmental restoration work while providing culturally-relevant programs that meet the needs of the communities we serve.

Best of all, we are able to help students recognize that “the environment” is all around them – in the neighborhoods, streets, and waterways they see every day.