Suquamish weaver Peg Deam sat sideways on the edge of the stage in IslandWood’s Great Hall, one leg hanging off, the other on top, straight and draped with cedar fibers. Peg was putting the finishing touches on a new skirt that would adorn the figure of Vi Hilbert carved into the room’s house post in the local Coast Salish style. Vi Hilbert (1918–2008) was a revered tribal elder of the Upper Skagit. She is credited with revitalizing the Lushootseed language and dedicated her life to recording and sharing the stories and teachings of its speakers through her research, writing, and performance. 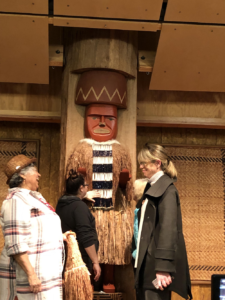 Peg split the strips of cedar into fine strands until she had achieved a wispiness that would encourage the skirt to “swing and sway.” A cedar skirt should cover the legs for warmth and modesty, but it must be gorgeous too. She talked as she worked, describing the process of gathering the cedar bark. “Every year I gather cedar. I learn something about every single tree…No one tree is the same as the next,” she said, adding that each has its own place in the forest, receiving its own light and rain. She examined the bark in Vi’s old skirt, which she had also made. “I must have pounded this three times…See how thin and feminine it is. It takes concentration.” Think about your grocery shopping, she laughed, and you’ll mess up.

This evening, IslandWood staff, graduate students, volunteers, and friends, several of whom knew Vi, had gathered to watch Peg re-dress the house post and to honor the life of this beloved teacher. IslandWood founder Debbi Brainerd recalled the time when she and Roger Fernandes, who with Bruce Miller carved the house post, went to visit Vi in her home. Vi told them to make sure that she created a post with deep meaning and suggested that it be in the image of a grandmother welcoming children to IslandWood with open arms. In her culture, she explained, elders care for all grandchildren, not just their own. Roger urged Debbi to ask Vi to be the grandmother. She agreed, and in the twenty years since, Grandmother Vi has welcomed over 50,000 children who have come to IslandWood to take part in the School Overnight Program (SOP).

These children have passed through the Great Hall, which is modeled after a longhouse, to learn about the culture of our Coast Salish neighbors, and in turn, they have passed their curious hands, perhaps when no one was looking, through the cedar strands, causing pieces to come loose over the years.

Their curiosity pleases Peg. “I would like people to see what that feels like,” she said. “This is a feeling that not many people know.” In fact, she knows of no other place where people can touch cedar clothing. Peg described traveling to a Washington DC museum to see its collection of Suquamish artifacts, where a cedar cape caught her eye. “Am I doing mine correctly?” she wondered. She was allowed to handle the cape but was made to wear white gloves. Turning the piece over to inspect the inside, she saw with satisfaction that she was weaving exactly as her ancestors had.

Vi, too, would be pleased. In 2006, she donated her collection of cedar baskets to IslandWood, envisioning that generations of students would touch and hold the baskets as they learned the stories of their creation. Though often described as “museum-worthy” for their exquisite artistry and remarkable condition, these baskets would not be at home in a museum. They are meant to be touched, and SOP instructors are trained to handle them with students. At a ceremony honoring this gift, Vi said, “You can’t learn without touching things. [The baskets] need to be picked up so people can honor the work and the feeling that went into making them.”*

IslandWood’s philosophy of education also calls on students to engage their senses, including touch, in their exploration of the natural world. But of course we want these precious garments and cedar baskets to last for many years. Careful storage and instruction have enabled children to touch and learn from the baskets, but until tonight, touching Vi’s cedar garments has not been encouraged. 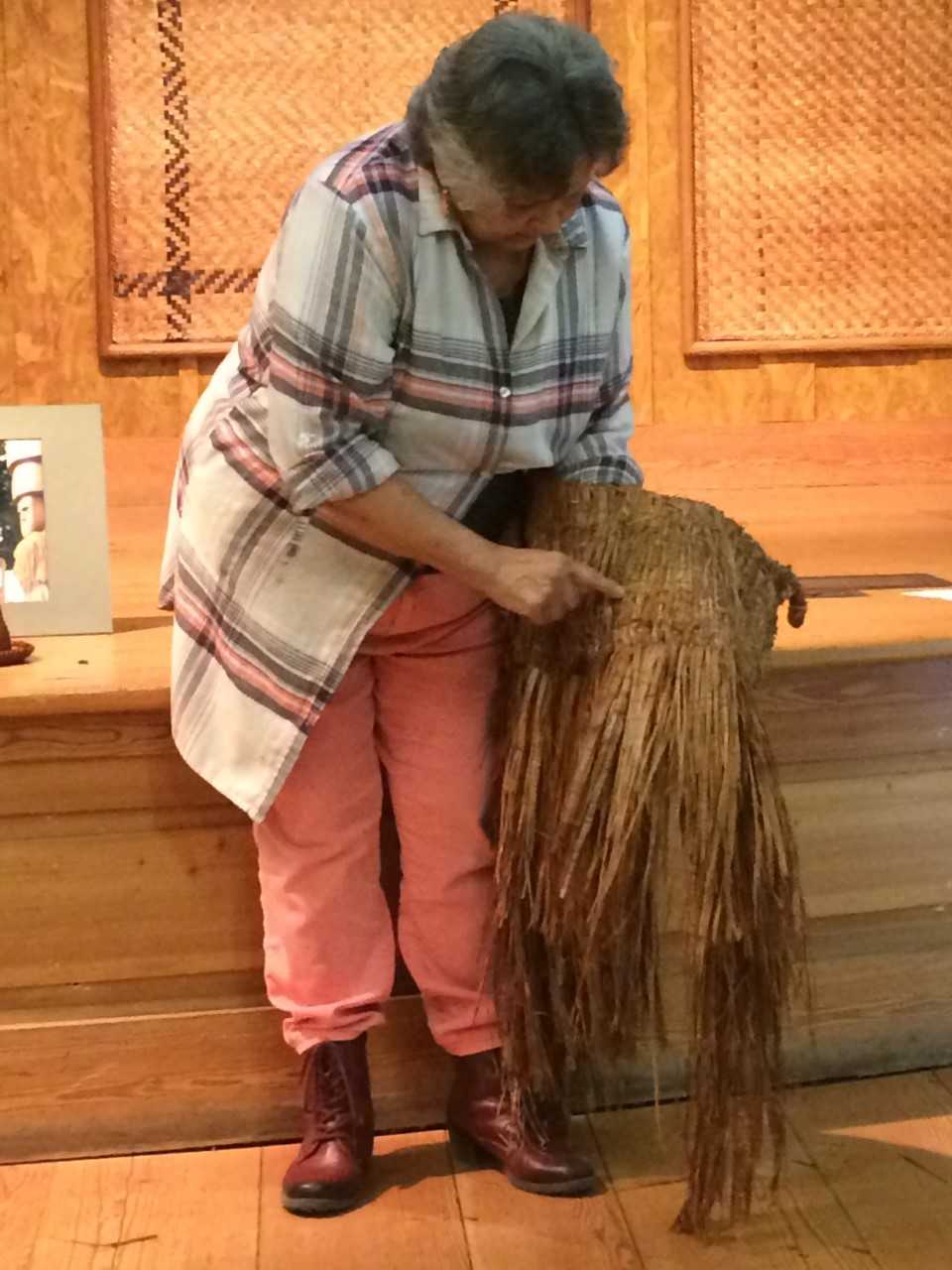 Peg Deam pointing at a detail in one of her cedar bark weavings.

With the help of her daughter Kate Ahvakana, also a weaver, and her son-in-law Toma Villa, a muralist, Peg tacked her new skirt to the post with nails, then trimmed any excess length and fluffed the strands with affection. Katie had made a new cedar cape to replace the original, but that one, perhaps from being slightly out of reach, remained in pristine condition, its original pale brown now darkened beautifully with age. Peg gathered the old skirt together with her daughter’s new cape into a bundle and gave it to IslandWood. The next 50,000 students would now have two garments to touch, feeling the gifts of the cedar tree, and the artistry, labor, and love of the creators. Perhaps their SOP instructors will hold the skirt up in the air and make it swing and sway as it should.

* “A weaving of the ages,” The Bainbridge Review, Saturday, September 16, 2006, http://www.bainbridgereview.com/news/a-weaving-of-the-ages/