Are You a Scientist?

Are You a Scientist? 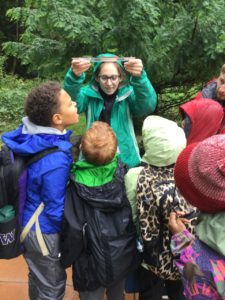 Kyleen Ellingsen with students in the School Overnight Program.

These are among the first questions I ask the 4th and 5th graders in my field groups on their first day in IslandWood’s School Overnight Program.

Depending on the group and the student, some students already think of themselves as scientists at the beginning of their week at IslandWood, some do not, and some feel that they are scientists only some of the time.

Whether or not students think of themselves as scientists, their identification with the term depends on the criteria they associate with a “scientist”:

• “…someone that studies many things. For example, food scientists are people who study food.”

• “A scientist is someone who studies things. Which can be anyone because you can study anything.”

• “…scientists don’t have to be old men with white coats. They can be anyone. And lots of people study things.”

• “A scientist is a person that studies nature, people, and other things.”

• “A scientist is people who discover and research stuff.”

• “…a person that does experiments and finds new things.”

• “…a firm believer in the scientific method.”

• “A scientist is a person who observed things humans don’t completely understand.”

• “I think a scientist is someone who studies things like bugs and animals. Some scientists also make liquid experiments.”

• “A scientist is someone who is smart, creative.”

• “A scientist is a person who discovers new things and makes exploshens.” 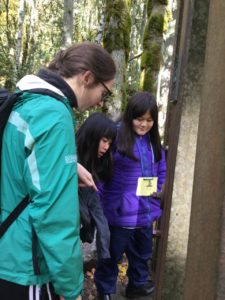 Kyleen in the forest with two students from the School Overnight Program.

I originally started asking these questions after a group of my fellow graduate students and I realized that we were curious about whether students perceived themselves to be scientists, and why or why not. After asking students these questions, I was intrigued by the wide range of answers they provided, and I began to wonder about the same questions myself: What exactly is a scientists?

With the help of my mentor, I reflected upon that question. We considered the eight Science and Engineering Practices that hang on the wall of the graduate classroom, which were introduced to us in our Elementary Science Teaching Methods and Social, Political, and Cultural Foundations of Education classes. The practices showcase the eight main skills that scientists use. We’re taught that if a person uses any of these eight skills, that person is engaging as a scientist.

1. Planning and Carrying Out Investigations

After multiple weeks of mulling these questions over by myself and with students, I decided to lead one group of students in a reflective debrief on how our lessons and activities throughout their week at IslandWood related to these Science and Engineering Practices.

I wondered whether students would be more likely to think of themselves as scientists if they were prompted to acknowledge the science skills they had demonstrated. Would their idea of what a scientist is have changed?

During the debrief, students placed the week’s activities into categories based on the eight Science and Engineering Practices. If the activity had involved one of the Practices, it was included in that category. Even if they hadn’t been aware of it at the time, students now had a chance to think deeply about how exactly they used the science practices in each activity throughout the week. 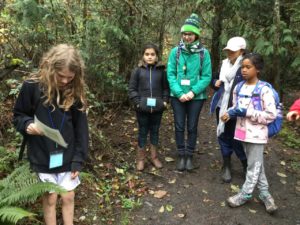 Kyleen and students in the School Overnight Program listen to another student.

Wrapping up the session, I posed the final question: “Using your thumbometer, are you a scientist?” (A thumbs up means “yes”, thumbs down means “no”, and a thumb to the side means “I don’t know” or “I’m still deciding.”)

I was curious about this and wanted to inquire more deeply. I gave them a situation to think about: I am a teacher. If I am eating dinner and telling jokes with my family, am I still a teacher? If an author is not currently writing a book, are they still a writer?

The students still maintained their concept of the “on-off switch.” If I am not actively teaching, they argued, then I am not a teacher in that moment.

My investigation of students’ self-perception of themselves as scientists is far from complete, and it probably never will be. Some students think that being a scientist is a skill one can turn on and off, while others think of it as a profession or even a process.

There are many definitions of what a scientist is in young people’s eyes. When I graduate from IslandWood and return to the classroom as a teacher, I hope to show my students that, even if they don’t think of themselves as scientists, in many ways they are. Just as they are mathematicians, writers, readers, historians, researchers, artists, and valued members of their community.