Planting the Seeds of Change: How a 5th Grader Became a Food Justice Leader

By his own account, the year Giorvi Merca came to IslandWood was the year he became an environmentalist.

That year, ten-year-old Giorvi resolved to use less plastic and switched from disposable water bottles to a metal one. Inspired by the salads prepared in the IslandWood kitchen and the experience of making his own pizza, he also resolved to cook more. He recalls his time in the garden fondly, where he and his classmates prepared tea with fresh-picked herbs and harvested kale to bake into chips. When he got home, Giorvi introduced his parents to this new snack. His affinity for the garden would prove enduring. 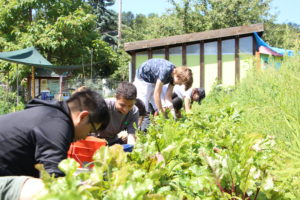 Giorvi and participants in a youth program with the Bill and Melinda Gates Foundation.

Five years later, an aspiring Eagle Scout and a sophomore at Sierra Summit High School, Giorvi has built on his personal resolutions and increased awareness to promote the health and sustainability of Seattle communities. He is a committed food justice activist and urban gardener who advocates for equitable access to quality food. For his Eagle Scout project, he created a community garden in White Center close to his school at the time. And through his association with iUrban Teen, a program which provides career and civic opportunities to students of color, Giorvi has been hard at work at the Yes Farm in Seattle’s Yesler neighborhood, a project of the Black Farmers Collective.

Spend ten minutes talking to Giorvi and you’ll not only feel his passion for this work, but recognize his initiative, his willingness, despite a hint of shyness, to go public with his desires as a learner and convictions as an environmentalist.  This courage and goodwill have endeared him to mentors like Ray Williams, a member of the Black Farmers Collective, and secured him a series of educational opportunities, such as participation in youth programs at the Bill and Melinda Gates Foundation, Wilderness Inner-City Leadership Development (WILD) Youth Program, and Model United Nations. These qualities have also endowed him as a leader. 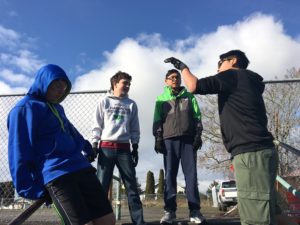 Giorvi instructing his work crew at the garden he created in White Center.

Creating the White Center garden called for boldness. Giorvi recruited close to thirty community members—friends, family, and fellow scouts—for a work crew and approached local businesses for donations of soil and seeds, which at the time, he admits, was “kind of scary.” He rallied his volunteers by posing a fun challenge: “How many buckets does it take to fill a garden bed?” and then organized a bucket brigade, the soil passing from one to the other down the line. Today his former school maintains the garden, using it for garden education and donating its produce to the Salvation Army. At the Yes Farm, Giorvi once managed a crew of adult volunteers from Town Hall Seattle. “I’m in charge of like 10 or 20 people now,” he remembers thinking proudly, “I had to become a leader.” To be successful, he made sure to combine labor with learning by sharing gardening wisdom, such as the benefits of coffee grounds as fertilizer. 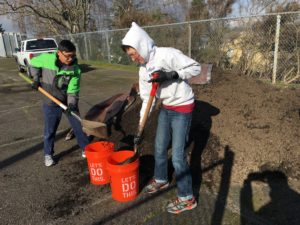 Volunteers load buckets of soil to fill beds at the garden Giorvi created in White Center.

What lies ahead for Giorvi? He plans to intern at Black Farmers Collective this summer and next fall, he’ll attend Seattle Central College through the Running Start program, which will allow him to finish high school while earning college credit. Giorvi’s leadership demonstrates the kind of exponential impact students and educators who participate in our programs are having in their communities and on the planet. We can’t wait to see what he does next!