“[It] really changed my personal perspective on what I could do”: An Interview with Natalie Myers about her IslandWood Experience

“[It] really changed my personal perspective on what I could do”: An Interview with Natalie Myers about her IslandWood Experience

Natalie Myers attended the School Overnight Program with Suquamish Elementary. Since then, she has earned a degree in Environmental Science from Occidental College, worked with Planned Parenthood on reproductive justice outreach and education, and participated in field research in Costa Rica, Panama, and Guam. She currently works as the Development and Events Intern for the Washington Environmental Council (WEC), as well as the Communications Assistant for the International Boreal Conservation Campaign. We caught up with Natalie to discuss her path after the School Overnight Program, her passion for environmental justice advocacy, and her commitment to making science accessible for all.

What do you remember from the School Overnight Program?

I’ve always been really fascinated with the outdoors, and I spent a lot of time outside growing up, so what I remember [about IslandWood] is that I was so excited. I thought it was the coolest thing ever, that we got to go on the little dock in the ice and take samples from the lake, and go on all these trails, and learn about all the animals and different species. And I remember the dining hall. I was so excited that there was a compost, recycling bins, and all that stuff, which is such a weird thing to get excited about as a child, now that I think about it. [Laughs] 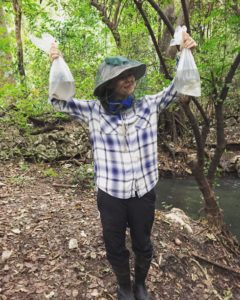 I just remember having so much fun there. Even though, going to Suquamish, they put an emphasis on outdoor education and learning about animals and nature, [the School Overnight Program] was kind of the first time where I felt like science was the focus of an entire trip. And that really excited me.

What did you take away from your time at IslandWood?

IslandWood gives children access to environmental resources and shows [them] that there is an opportunity to work in [STEM] fields, and that there are adults who are working in those fields. Growing up, a lot of my role models were people I saw on TV who were doing science and nature education, but not any people that I personally knew. Going to IslandWood and being able to see people who were actively working in that field, who were teaching me about it, really changed my personal perspective on what I could do. It was kind of like, “Oh, I could do that. I could be one of those people.”

I loved IslandWood. I had such a great time there as a child. And I wish that every child could go there and have that experience, because it was definitely meaningful in my life.

You studied biology and environmental science during college, and participated in multiple field research projects while at school and after you graduated. Can you tell us about some of your experiences, and how they’ve influence where you are today?

I was able to work in two different research labs while I was studying [at Occidental College]. One of them was a marine biology lab, and the other was a zoology lab. I did a joint lab research project where we studied the genetics of a common marine fish in Southern California, among other projects. Another summer, I went to Costa Rica and did research with one of my professors. And then I went back [to Costa Rica] to study abroad and do research projects through the Organization of Tropical Studies. I got to travel around Central America, Panama, and Costa Rica, and work with local researchers, and they emphasized the importance of local- and indigenous-led conservation. It’s really nice to be able to combine the science with the political impact.

And then [at Occidental] we re-started the Biology Club, because it had fallen to the wayside. Our mission was to make science more accessible. We [took] students to the Natural History Museum and to different science exhibits, because they’re often expensive and it’s hard to get places in L.A. We organized transportation, bought the tickets, and tried to find things that worked for everyone. We basically made it so that people didn’t have to do anything but show up.

We were also able to do science demos that just made science seem a lot less intimidating and scary, and a lot more interesting. I feel like there’s a huge divide between [people who are involved in] science and ecology and those kinds of fields, and people who aren’t. We were trying to break that down and show people that [science isn’t] scary and it’s not different from any other subject.

After I graduated, I took a job doing field research in Guam, studying forest community dynamics. Doing that field work highlighted that I really like to work with people and see the impact [of my work]. That’s what led me to working at WEC, because I wanted to see “What are the impacts my research? How does this affect actual people and actual policy and translate to everyday life?” 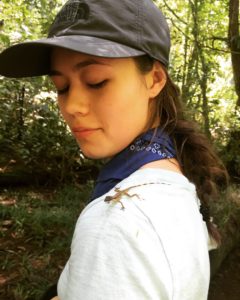 What is important to you about environmental justice? What draws you to this work?

To me, environmental justice and environmental equity means ensuring that everybody has the ability to access education and the environment, while also living a healthy life. Just because you live in a lower income community doesn’t mean you should be exposed to more air pollution. Environmental justice is not just its own thing; it’s tied really deeply to racial justice and social justice in general, and economic justice. These issues aren’t separate issues, but rather they’re all part of big systematic problems that we have as a culture and as a society. And we can’t really address any single one of them without addressing the other ones. And it’s important to recognize that, regardless of what field you’re in, but especially working in environmental justice.

I think in the past, [the environmental movement has] really focused on white people and upper middle-class communities. And those aren’t the communities that are going to be the most affected by climate change and pollution. That’s just the cold, hard truth. And we really need to reconcile that and make sure that [the environmental movement] includes people of color, and black people, and disabled people, and the people who are actually going to be most impacted by this issue.

It’s cool because IslandWood is in a position where you can talk about those issues with students. I don’t know if [equity] is part of school curriculum in lower education, but if it’s not, IslandWood can bring in that environmental equity aspect and start that conversation. And that’s a super cool position to be in with young children.

This interview has been edited and condensed for clarity.