For Morgan Malley (’19), Students are Partners in Learning

For Morgan Malley (’19), Students are Partners in Learning

For Morgan Malley, becoming a teacher has meant consciously moving from a traditional hierarchy, with the teacher at the top and students down below, to a partnership, in which she welcomes students’ experiences and ideas into the classroom. It is a critical shift for someone who wants to be a culturally responsive teacher, one who honors students’ diverse backgrounds and ways of engaging in learning. 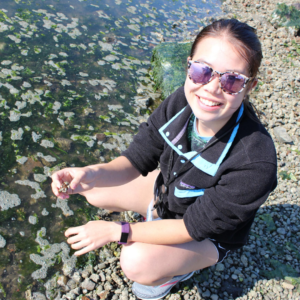 Morgan Malley at Blakely Harbor during her time in IslandWood’s graduate program.

This evolution took place in a matter of months—intense ones. She began IslandWood’s graduate program in August 2018, where she taught in the School Overnight Program (SOP), and graduated the following June. That fall she completed her master’s in education at our partner university, the University of Washington. And by February 2020 she had secured a new job as a 5th grade social studies and science teacher at The Hamlin School, a private girls school in San Francisco. That makes 18 months.

Morgan came to IslandWood after teaching at an outdoor school in California. “I felt like we took the kids on a tour of the outdoors,” she recalled. Teachers would tell students that the national parks they visited belonged to them, but the reality was that most could not easily hop in a car with their families to visit. At IslandWood, a ferry ride and more from students’ neighborhoods, the same contradiction could easily play out. Morgan made sure that it didn’t. Building from the SOP curriculum, she emphasized that experiencing the natural world was more than simply going to a designated place, but a habit of inquiry and a desire for discovery that could happen anywhere. Just as they sought out a Douglas fir on campus, identifying it by its large cones and deeply furrowed bark, a student might do the same with the trees that surround a baseball field in their neighborhood park.

Connecting lessons to the lives of students requires getting to know them first. Teaching in SOP, where she had only four days and three nights with students and a new school each week, Morgan learned techniques for building relationships quickly. She would often ask the members of her field group to share three important things about themselves, and she would do the same, talking candidly about her struggle in conventional school environments when she was younger. Students, she found, were freed by this exchange and would “gush” about their lives. Morgan also made sure that students knew their voices matter: She never turned down a raised hand, and when she couldn’t answer a question, she would write it on the board and return the next day with an answer. This skill has served her well at The Hamlin School. Three weeks into the job, COVD-19 set in and Morgan began teaching online. It’s going well, thanks to the rapport and trust she had established in that short time (never mind that she learned all 50 students’ names on her first day). 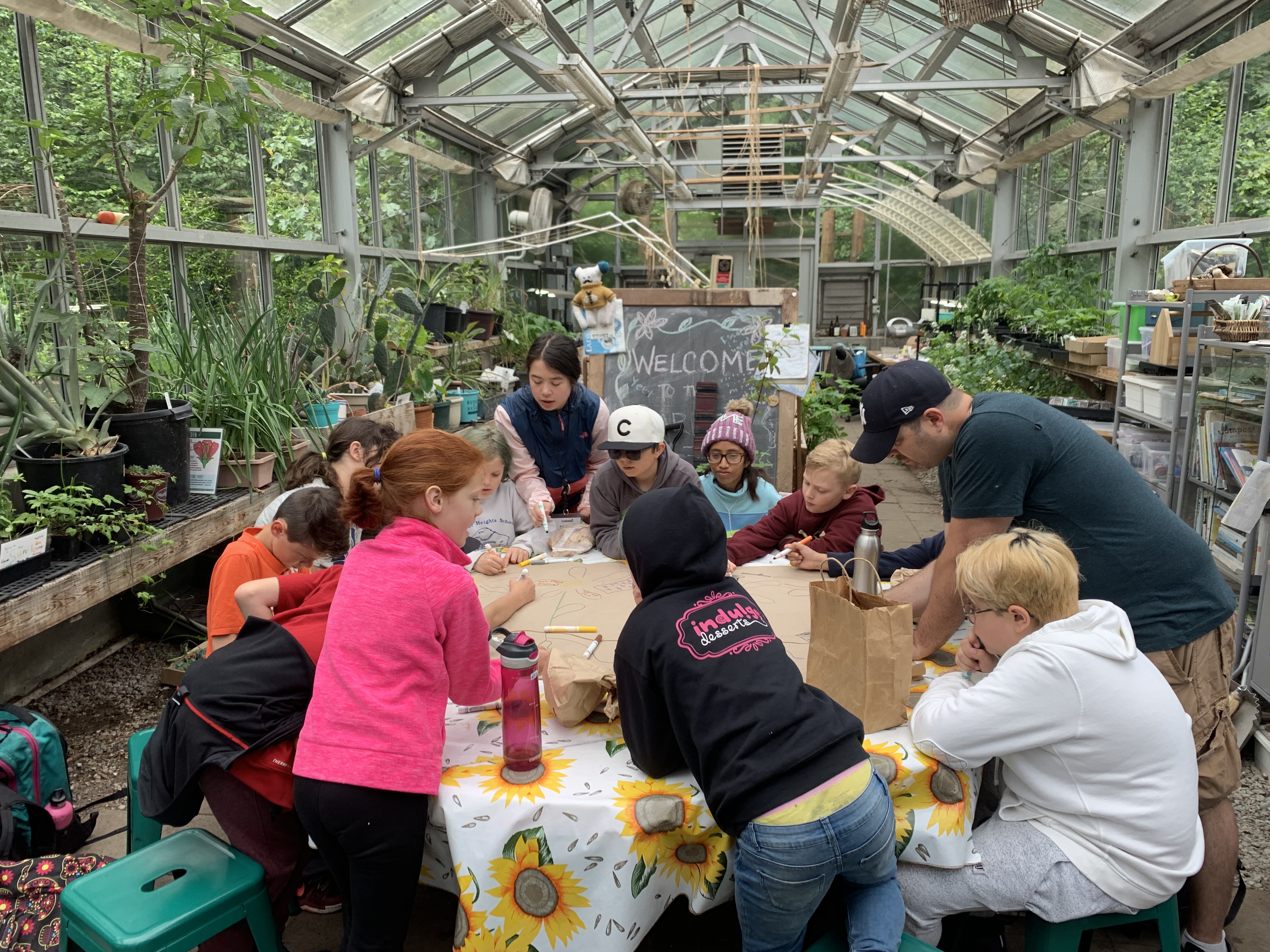 Morgan with her students with the School Overnight Program engaged in a lesson in IslandWood’s garden greenhouse classroom.

There is one SOP student that Morgan will never forget, perhaps because getting to know him was just so hard. Victor didn’t like IslandWood, and he let her know it without say a word. He pulled the hood of his sweatshirt low, never took his backpack off, and kept to himself. Rather than coax him to participate, Morgan followed the advice of Kelvin Washington, an IslandWood alum who had met with grads earlier in the year. She did the exact opposite of what her instinct told her: She handed Victor responsibility—and a map. Choose three places to go tomorrow, she told him. And after some initial reluctance, he did. At each stop, where a new adventure unfolded, Morgan made it clear that Victor was responsible. Later in the week and with great satisfaction, she watched him in the garden taking part in Soil to Snack, cutting, mixing, and talking easily.

Early in the year, IslandWood grads write a philosophy of education. It’s not meant to be a static document, but something to revisit and revise. Morgan’s original centered on three elements: empower students, change their mindsets, and help them become lifelong learners. It’s the middle element that’s evolved. She no longer feels compelled to change students, to prove that one approach is better than another. Instead she exposes them to a variety of perspectives, different ways of learning and teaching and different viewpoints on a subject, recognizing that each student exists within their own intersection of values, interests, culture, and history and will engage with content in unique ways.

Most IslandWood grads choose to continue their education at our partner, the University of Washington, to pursue either a master’s in teaching or a master’s in education. Morgan chose the latter and had the opportunity to take a class on culturally responsive teaching with Jessica Thompson. Here, where she had critical distance from her ten months teaching SOP and time to revisit theory first introduced at IslandWood, everything jelled, giving her the language and fluency to articulate the principles that guide her work and the theory to back it up. 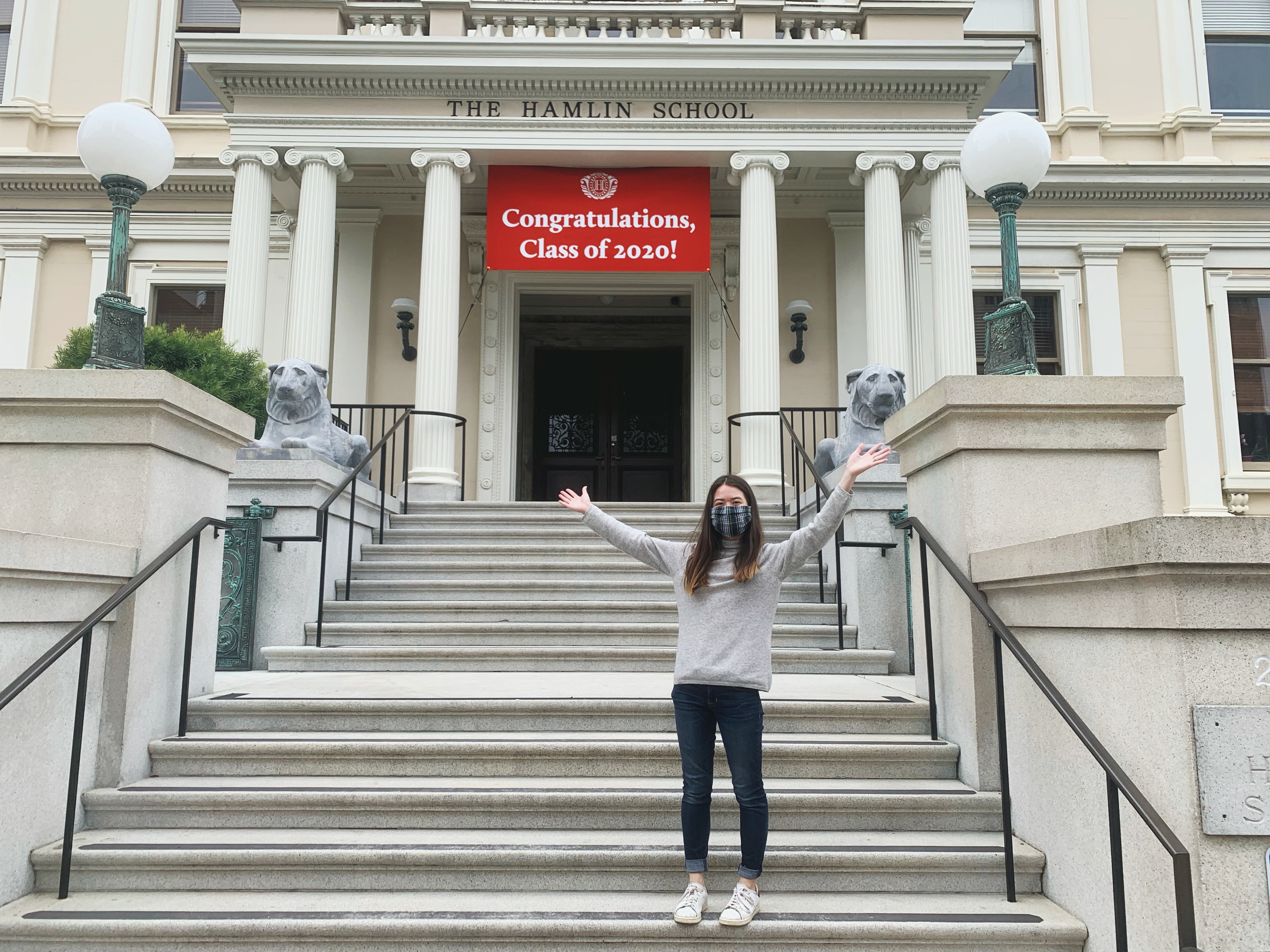 Morgan on the front steps of The Hamlin School in San Francisco, California.

At IslandWood, where she developed deep and honest relationships with her mentor and fellow grads, Morgan learned to give and receive feedback without letting emotion get in the way. When she began her new position at The Hamlin School, she asked questions, lots of them, without fear of being judged. She wanted to learn, to understand her new job and do it well, and with that feedback, continue her evolution as a teacher.

Please note that this post was last updated on 8/11/2020. Some details, including job title or place of employment, may have changed since then.