“I like the fact that IslandWood is reaching children when they are the most curious.”

It’s safe to say that John Warner’s first experience with IslandWood was a memorable one. Read on to learn how one nearly canceled (and very muddy) tour of IslandWood’s Bainbridge Island campus two decades ago sparked John’s deep commitment to funding outdoor education for children throughout the region and beyond.

How did you first hear about IslandWood?

I worked for Boeing for quite a long time, and it is a very philanthropic company. By the late 90’s I was Senior Vice President and Chief Administrative Officer, and I was tasked with organizing the search for our new headquarters.

In the middle of working on our move to Chicago, Joyce Walters, who was heading up our K-12 education philanthropy work, approached me about doing a tour at the “Puget Sound Environmental Learning Center” on Bainbridge Island. Nobody had ever heard about it, and it had some big long words, so I told her no. [Laughs.] Well, she came back to me two weeks later and repeated her request. She wouldn’t take no for an answer.

My wife Marilyn was going to come along with me, but we almost canceled the tour because we learned we would be babysitting our oldest grandchild, Robert, that day. So we asked if we could postpone, but we were told to please bring 6-year-old Robert, that he was more than welcome. 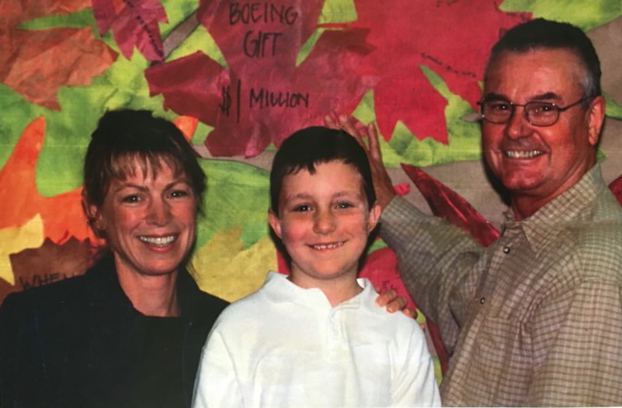 How did that first tour go? Is it true that you became a supporter on the spot?

Debbi Brainerd, IslandWood’s founder, met us on the ferry. She started showing Robert how to read a map, which he’d never done before. When we arrived at the site, it was muddy and under construction. We were walking through this big mess. Debbi and Robert were in the lead and Debbi was painting a vision of what was to come, and Robert was fascinated.

This next part I tell frequently: at the end of the tour, I asked Robert what he thought about the place, and he said, “Oh, Papa, this is a wonderful place.”

Then, on behalf of Boeing, I gave them a million dollars and joined the board. [Laughs]

I love telling the story that way. Because my grandson did love it, and I could see it through his eyes. But the truth is I also saw it through the eyes of an adult. I liked IslandWood because it was absolutely brilliant. The quality of the plans and the attention to detail were phenomenal. I loved the focus on the kids and the design of the learning center. I loved the fact that the kids were included in the design, and that they provided input on issues large and small, such as asking for the windows to be placed at the heads of the beds so they could see the woods.

And I was passionate about making sure kids who had never had this type of experience would be able to receive it.

Do you have a favorite memory from IslandWood’s early days?

The favorite memory I have is within the first few years of IslandWood’s opening. We went to an overnight weekend for supporters and their families. Robert, Marilyn, and I stayed at one of the lodges and sat outside by the fire. We read a poem by David Whyte called “Lost”, about what to do if you’re lost in the woods. We have pictures of that moment, reading poetry by the fire. It’s a very treasured memory, and I will never forget it.

Why have you and Marilyn continued to support IslandWood for 20 years and what do you hope for its future?

As for what the future should hold, that’s always a tough one. We’ve worked on this, and I’m hopeful that we’re able to increase the number of students we serve from Seattle. I also would like to see students come in from around the world, and I’d like to see similar programs throughout Washington and the Northwest.

I like the fact that IslandWood is reaching children when they are the most curious. That curious age is the best time to get ahold of them – [the experience] really works for them.

I hope to see that opportunity expand to every child, because every child deserves to have that wonder opened to them.